In the sliding filament model, the actin and myosin filaments pass each other, forming cross-bridges that shorten the sarcomere.

The mechanism of muscle contraction is the binding of myosin to actin, forming cross-bridges that generate the filament movement. When a muscle contracts, the actin is pulled along myosin toward the center of the sarcomere until the actin completely overlaps with myosin filaments. In other words, for a muscle cell to contract, the sarcomere must shorten. However, the thick and thin filaments, which are components of sarcomeres, do not compress. Instead, they slide by one another, causing the sarcomere to shorten while the filaments remain the same length.

To better understand the sliding filament model requires knowledge on the sarcomere. When a sarcomere shortens, some regions shorten, whereas others stay the same length. 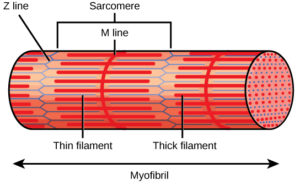 Movement often requires the contraction of a skeletal muscle, as can be observed when the bicep muscle in the arm contracts, drawing the forearm up towards the trunk. The sliding filament model describes the process used by muscles to contract. It is a cycle of repetitive events that causes actin and myosin myofilaments to slide over each other, contracting the sarcomere and generating tension in the muscle.

Titin molecules connect the Z-line with the M-line and provide a scaffold for myosin myofilaments. Their elasticity provides the underpinning of muscle contraction. Titin molecules are thought to play a key role as a molecular ruler maintaining parallel alignment within the sarcomere. Another protein, nebulin, is thought to perform a similar role for actin myofilaments.

The molecular mechanism whereby myosin and acting myofilaments slide over each other is termed the cross-bridge cycle. During muscle contraction, the heads of myosin myofilaments quickly bind and release in a ratcheting fashion, pulling themselves along the actin myofilament.

At the level of the sliding filament model, expansion and contraction only occurs within the I and H-bands. The myofilaments themselves do not contract or expand and so the A-band remains constant.

• The sarcomere is the region in which sliding filament contraction occurs.

• Within the sarcomere, key regions known as the I and H band compress and expand to facilitate this movement.

• The myofilaments themselves do not expand or contract.

• The Sliding Filament Model states that when a sarcomere contracts, the myosin head binds to the actin filament, forming cross-bridges that generate the filament movement.

actin: a protein which interacts with myosin filaments to generate tension

myosin: a motor protein which interacts with actin filaments to generate tension

cross-bridge: a projection from the thick filaments that attach to the thin ones and exert forces on them

sarcomere: a structural unit of a myofibril in striated muscle, consisting of a dark band and the nearer half of each adjacent pale band.

A-band: The length of a myosin myofilament within a sarcomere.

M-line: The line at the center of a sarcomere to which myosin myofilaments bind.