The nervous system is vulnerable to various disorders, including schizophrenia, depression, Alzheimer’s disease, and Parkinson’s disease.

Schizophrenia is a serious and often-debilitating mental illness. Symptoms of the disease include the inability to differentiate between reality and imagination, inappropriate and unregulated emotional responses, difficulty thinking, and problems with social situations.

The development of schizophrenia is thought to involve malfunctioning dopaminergic neurons and may also involve problems with glutamate signaling. Treatment for the disease usually requires anti-psychotic medications that work by blocking dopamine receptors and decreasing dopamine neurotransmission in the brain. This decrease in dopamine can cause Parkinson’s disease-like symptoms in some patients. While some classes of anti-psychotics can be quite effective at treating the disease, they are not a cure; most patients must remain medicated for the rest of their lives. 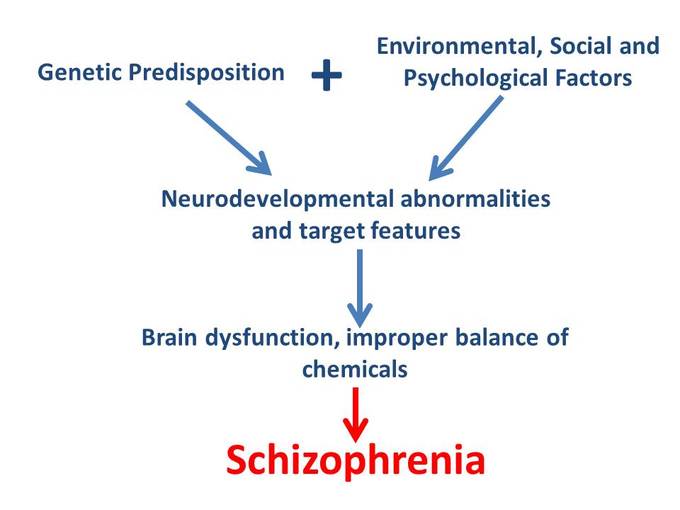 Major depression is categories by a severely-depressed mood lasting longer than two weeks along with other symptoms that may include a loss of enjoyment in activities that were previously enjoyed, changes in appetite and sleep schedules, difficulty concentrating, feelings of worthlessness, and suicidal thoughts. The exact causes of major depression are unknown and probably include both genetic and environmental risk factors. Some research supports the “classic monoamine hypothesis,” which suggests that depression is caused by a decrease in norepinephrine and serotonin neurotransmission. One argument against this hypothesis is the fact that some antidepressant medications cause an increase in norepinephrine and serotonin release within a few hours of beginning treatment, but clinical results of these medications are not seen until weeks later. This has led to alternative hypotheses. For example, dopamine may also be decreased in depressed patients, or it may actually be an increase in norepinephrine and serotonin that causes the disease, and antidepressants force a feedback loop that decreases this release.

Treatments for depression include psychotherapy, electroconvulsive therapy, deep-brain stimulation, and prescription medications. Most commonly, individuals undergo some combination of psychotherapy and medication. There are several classes of antidepressant medications that work through different mechanisms. For example, monoamine oxidase inhibitors (MAO inhibitors) block the enzyme that degrades many neurotransmitters (including dopamine, serotonin, norepinephrine), resulting in increased neurotransmitter in the synaptic cleft. Selective serotonin reuptake inhibitors (SSRIs) block the reuptake of serotonin into the presynaptic neuron. This blockage results in an increase in serotonin in the synaptic cleft. Other types of drugs, such as norepinephrine-dopamine reuptake inhibitors and norepinephrine-serotonin reuptake inhibitors, are also used to treat depression.

Alzheimer’s disease is a neurodegenerative disease, and the most common cause of dementia in the elderly. Symptoms of Alzheimer’s disease include disruptive memory loss, confusion about time or place, difficulty planning or executing tasks, poor judgment, and personality changes.

Alzheimer’s disease was named for Alois Alzheimer, a German psychiatrist who published a report in 1911 about a woman who showed severe dementia symptoms. Along with his colleagues, he examined the woman’s brain following her death and reported the presence of abnormal clumps, which are now called amyloid plaques, along with tangled brain fibers called neurofibrillary tangles. Amyloid plaques, neurofibrillary tangles, and an overall shrinking of brain volume are commonly seen in the brains of Alzheimer’s patients. Loss of neurons in the hippocampus is especially severe in advanced Alzheimer’s patients. Many research groups are examining the causes of these hallmarks of the disease.

Parkinson’s disease causes the loss of dopamine neurons in the substantia nigra, a midbrain structure that regulates movement. Loss of these neurons causes many symptoms including tremor (shaking of fingers or a limb), slowed movement, speech changes, balance and posture problems, and rigid muscles. The combination of these symptoms often causes a characteristic slow, hunched, shuffling walk. Patients with Parkinson’s disease can also exhibit psychological symptoms, such as dementia or emotional problems.

Parkinson’s disease: Parkinson’s patients often have a characteristic hunched walk. The disease is likely the result of a combination of genetic and environmental factors.

There have been attempts to regenerate dopaminergic neurons in the substantia nigra using stem cells placed into the central nervous system as a treatment for Parkinson’s disease. Similar stem cell-based therapies have been used in other contexts, such as after a spinal cord injury or stroke to attempt to regenerate function in the central nervous system with limited results.

• Complications with thinking, mood, or problems relating to other people are issues that are commonly associated with those affected with neurodevelopmental disorders.

• Malfunctioning dopaminergic neurons and problems with glutamate signaling are thought to be potential causes of schizophrenia.

• Symptoms of neurodegenerative disorders usually depend on the area within the nervous system where neuron deaths take place.

• A decrease in the activity of cholinergic neurons is commonly seen in patients with Alzheimer’s disease.

• In Parkinson’s disease, the loss of dopamine neurons results in symptoms that include tremors, slowed movement, speech changes, balance and posture problems, and rigid muscles.

• There have been attempts to regenerate dopaminergic neurons in the substantia nigra using stem cells placed into the central nervous system.

• Similar stem cell-based therapies have been used in other contexts, such as after a spinal cord injury or stroke to attempt to regenerate function in the central nervous system with limited results.

norepinephrine: a neurotransmitter found in the locus coeruleus which is synthesized from dopamine

serotonin: an indoleamine neurotransmitter that is involved in depression, appetite, etc., and is crucial in maintaining a sense of well-being, security, etc.

mental illness: any of the various diseases affecting the mind onset by brain damage or genetics

depression: in psychotherapy and psychiatry, a period of unhappiness or low morale which lasts longer than several weeks and may include ideation of self-inflicted injury or suicide

dopamine: a neurotransmitter associated with movement, attention, learning, and the brain’s pleasure and reward system

neurodegenerative: of, pertaining to, or resulting in the progressive loss of nerve cells and of neurologic function

dementia: a progressive decline in cognitive function due to damage or disease in the brain beyond what might be expected from normal aging

Parkinson’s disease: a degenerative disorder of the central nervous system

glutamate: the anion of glutamic acid in its role as a neurotransmitter

neurotransmission: the process by which signaling molecules called neurotransmitters are released by the axon terminal of a neuron