Red blood cells or erythrocytes are specialized cells that circulate through the body delivering oxygen to other cells, are formed from stem cells in the bone marrow. In mammals, red blood cells are small, biconcave cells that, at maturity, do not contain a nucleus or mitochondria; they are only 7–8 µm in size. Red blood cells contain hemoglobin, a protein that uses iron to carry oxygen (it transports carbon dioxide as well). 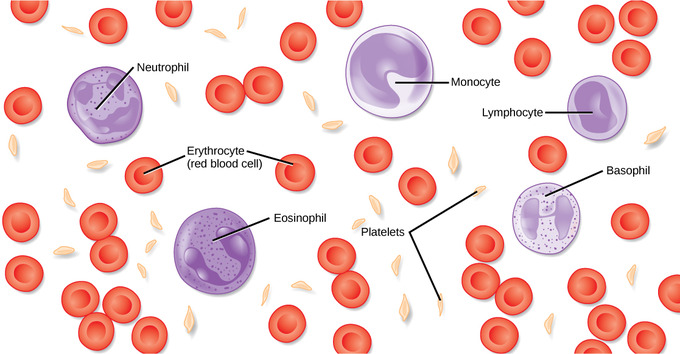 White blood cells also called leukocytes (also known as macrophages) are primarily involved in the immune response to identify and target pathogens, such as invading bacteria, viruses, and other foreign organisms. White blood cells are formed continually; some live only for hours or days, while some live for years. The morphology of white blood cells differs significantly from red blood cells. They have nuclei and do not contain hemoglobin.

Blood must form clots to heal wounds and prevent excess blood loss. Small cell fragments called platelets are formed from the disintegration of larger cells called megakaryocytes that are involved in the clot formation.

Plasma, the liquid component of blood, is similar to interstitial fluid in which the correct composition of key ions acting as electrolytes is essential for normal functioning of muscles and nerves. Other components in the plasma include proteins, which assist with maintaining pH and osmotic balance while giving viscosity to the blood; antibodies, or specialized proteins that are important for defense against viruses and bacteria; lipids, including cholesterol, which are transported in the serum; and various other substances including nutrients, hormones, metabolic waste, and external substances, such as drugs, viruses, and bacteria.

The kidney plays a pivotal role in the regulation of plasma by controlling the plasma volume and red blood cell mass. This is controlled when the kidneys either retain water or allow water to be expelled and also balancing the amount of sodium and other vital ions that are either kept or lost in the urine. Albumin (produced by the liver) is the major osmoregulatory protein in the blood – increases in albumin in the blood lead to an increase in interstitial fluid into the bloodstream and therefore an increase in blood pressure.

A clinical approach to anemia: solve the case

• Red blood cells, or erythrocytes, get their color from the iron-containing protein hemoglobin that carries oxygen from the lungs to the body and carbon dioxide back to the lungs.

• Platelets (thrombocytes) are small, anucleated cell fragments that result from the disintegration of megakaryocytes. Activated platelets stick together to form a platelet plug, which enables coagulation factor proteins found in the blood to further enhance the response to injury by strengthening the plug with fibrin.

• Plasma, the liquid component of blood, comprises 55 percent of the total blood volume.

• Plasma is composed of 90 per cent water with antibodies, coagulation factors, and other substances such as electrolytes, lipids, and proteins required for maintaining the body.

• Blood cells are created in the bone marrow and destroyed in the spleen.

hemoglobin: iron-containing substance in red blood cells that transports oxygen from the lungs to the rest of the body; it consists of a protein (globulin) and heme (a porphyrin ring with iron at its center)

erythrocyte: an anucleate cell in the blood involved with the transport of oxygen called a red blood cell because of the red coloring of hemoglobin

pathogen: any organism or substance, especially a microorganism, capable of causing diseases, such as bacteria, viruses, protozoa, or fungi

clot: a solidified mass of blood