1) To start us off on the bio/biochem section of the Sample test, we’re being asked to consider the effect of GTP hydrolysis to GDP when bound to Arf1. This passage was quite dense, but we can use the following information from the end of paragraph 2 to answer the question. “The Arf1 GTPase activating protein (GAP) catalyzes the conversion of Arf1-bound GTP to GDP and inorganic phosphate, thereby converting the protein to the inactive form.”

2) This question is a pseudodiscrete. Take a look at the structure of AMP in preparation for the answer choices. 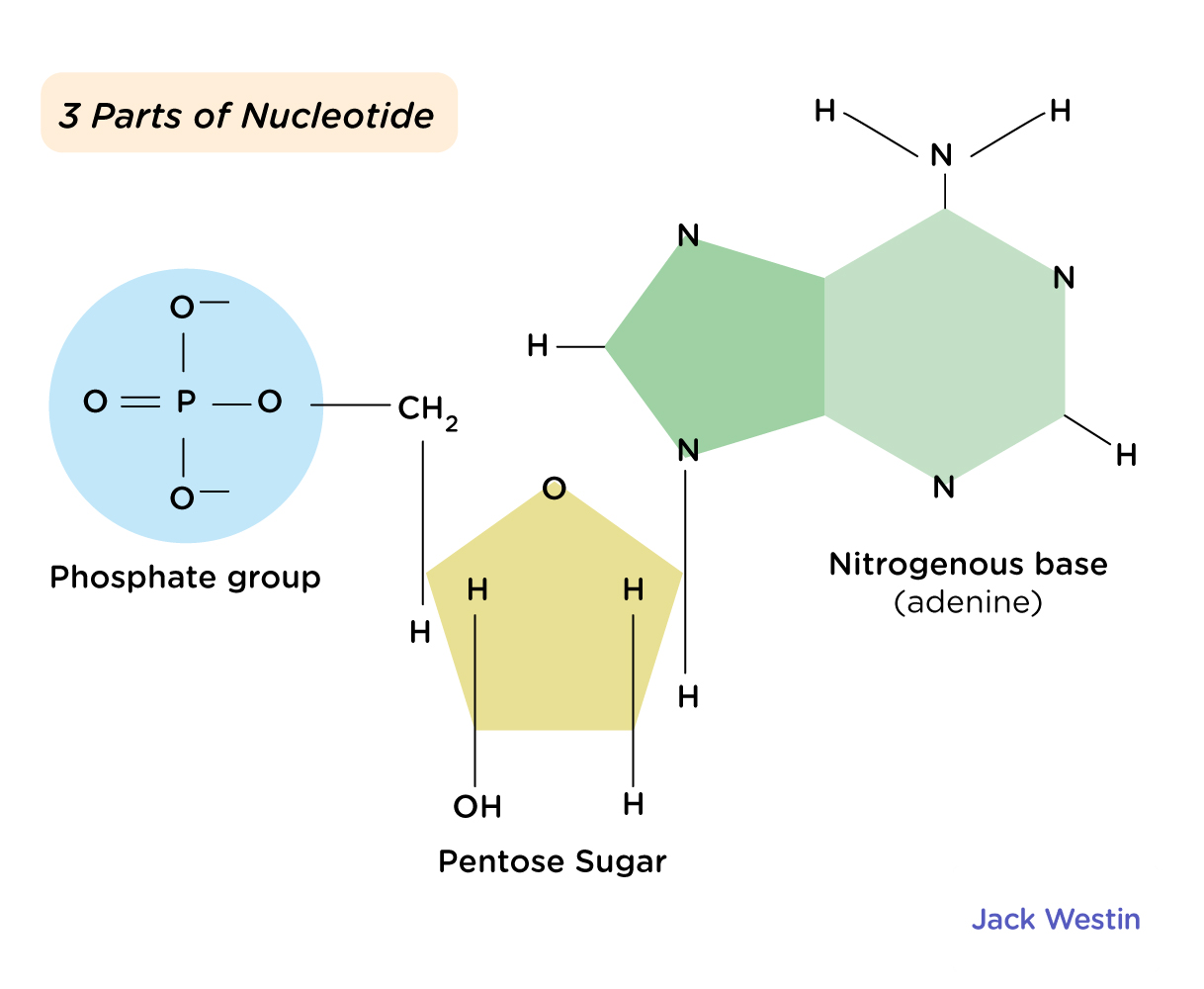 3) The passage states the following: “GTPase activating protein (GAP) catalyzes the conversion of Arf1-bound GTP to GDP and inorganic phosphate, thereby converting the protein to the inactive form.”

4) The second paragraph begins with “ADP-ribosylation factor I (Arf1) plays an essential role in vesicle formation and is responsible for the recruitment of cytosolic coat protein complexes (COPs) and subsequent retrograde transport from the Golgi apparatus.”

5) To answer this question, let’s go back to the passage. In the third paragraph, the author states “Brefeldin A (BFA), a lactone compound isolated from fungi, has been shown to inhibit Arf1-driven vesicle formation, resulting in reversible disruption of the Golgi apparatus.”

11) For all the future doctors reading this solutions set, this is a great passage to reread if you have the time because you’ll actually learn a lot more about this topic once you’re in medical school and studying hematology. The key to answering this question is the location of the Factor VIII gene given in the passage: “The Factor VIII gene lies on the X chromosome” and is “recessive.” As noted in the passage, “men have only one X chromosome,” so men will make up the majority of the affected individuals. Because the gene is inherited on the X chromosome, it also means that males will need to inherit the mutated gene from their mother because their father will provide the Y chromosome. 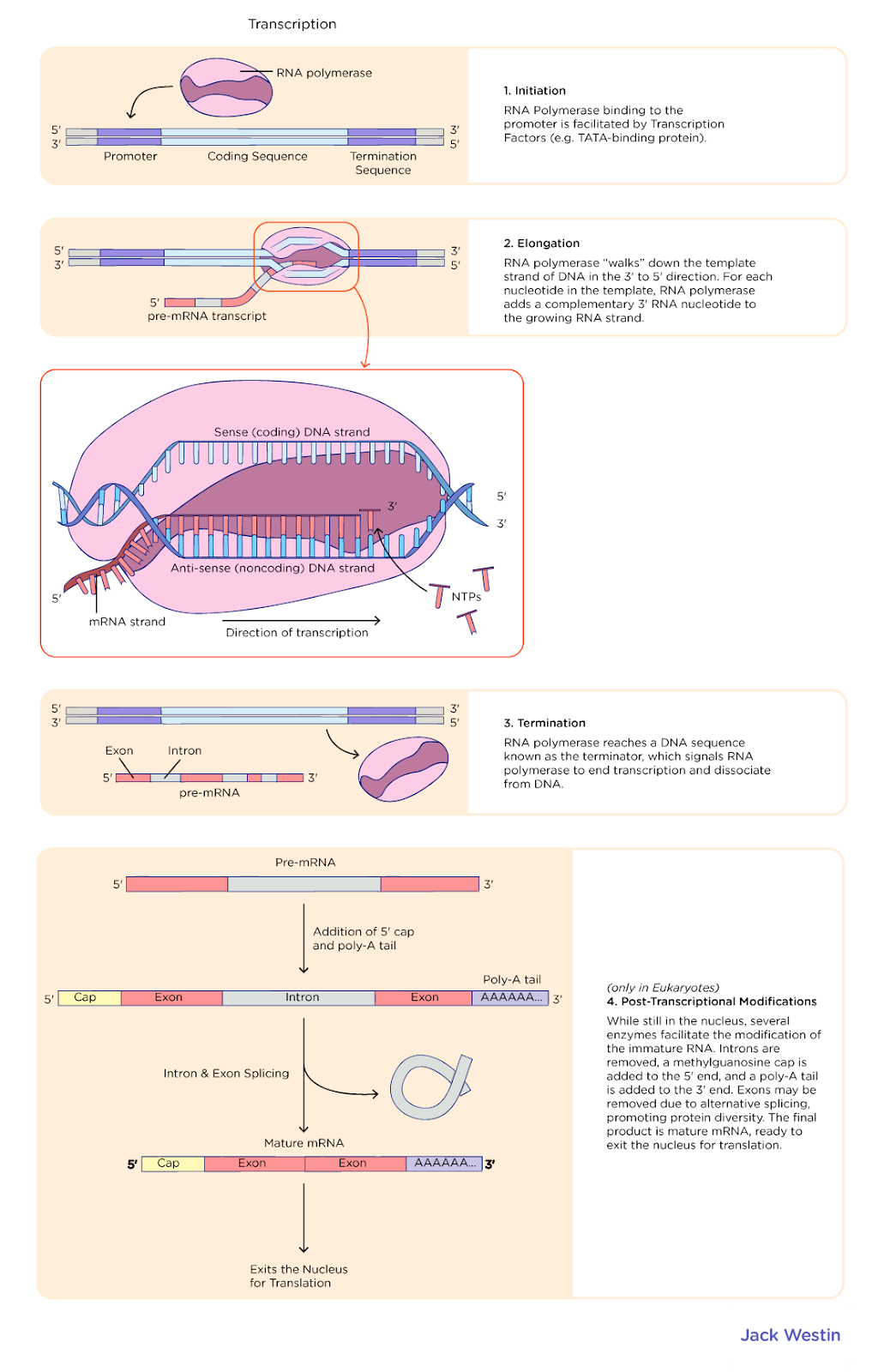 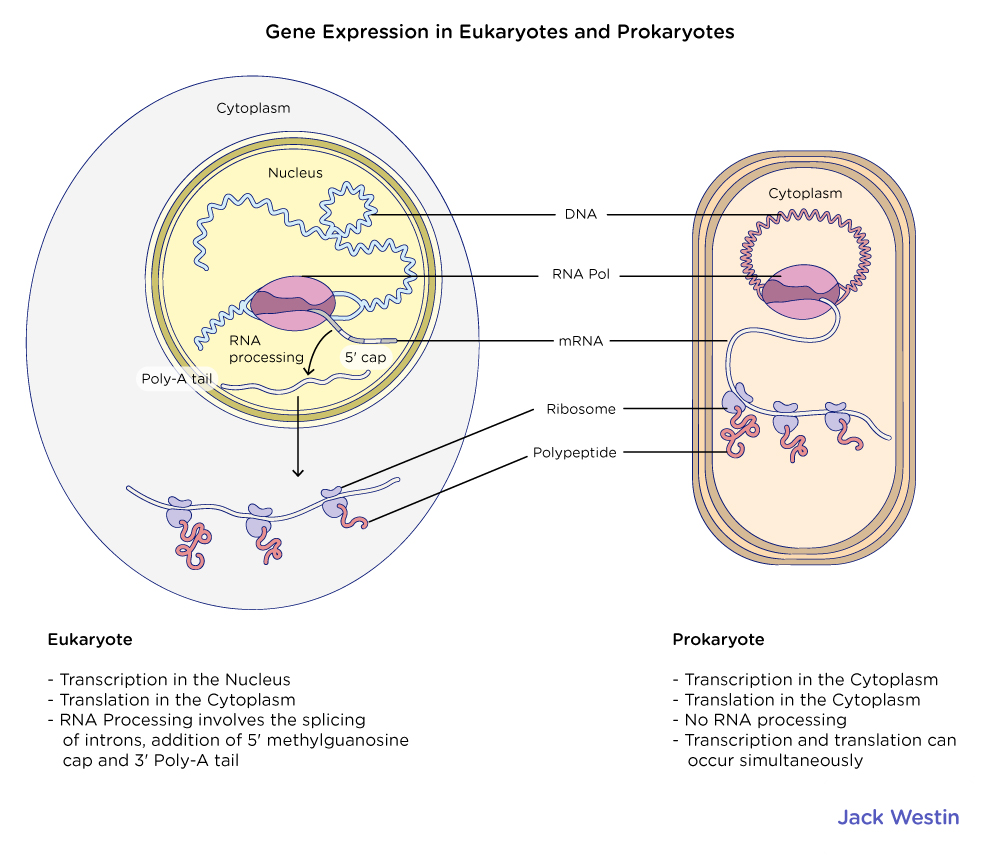 For a review of the electron transport chain, head over to https://jackwestin.com/resources/mcat-content/oxidative-phosphorylation/electron-transfer-in-mitochondria

17) A good PCR primer will have a high GC content at either end. Pause here and try to think about why this is the case. Welcome back! Higher GC content means stronger bonding (3 hydrogen bonds in a GC pairing compared to 2 H-bonds in an AT pairing), higher melting temperature and a more stable setup for PCR. Ideally, the GC content for a primer should be between 40-60%.

18) Nondisjunction occurs when the chromosomes do not correctly segregate during meiosis. Feel free to follow along on the figure below as we look through the answer choices. 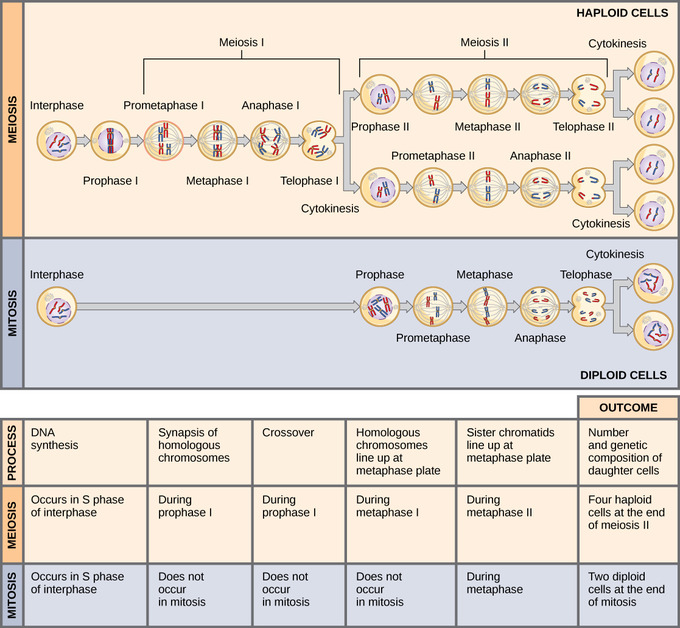 For a refresher on the differences between mitosis and meiosis, check out https://jackwestin.com/resources/mcat-content/meiosis-and-other-factors-affecting-genetic-variability/important-differences-between-meiosis-and-mitosis and for more on gene segregation (more directly applicable to this question) hop over to https://jackwestin.com/resources/mcat-content/meiosis-and-other-factors-affecting-genetic-variability/segregation-of-genes

19) To answer this question, we can take a look at Fig. 1, the structure of ms2t6A, shown below with annotations. This cannot be overstated: you need to be incredibly comfortable with amino acids on test day. 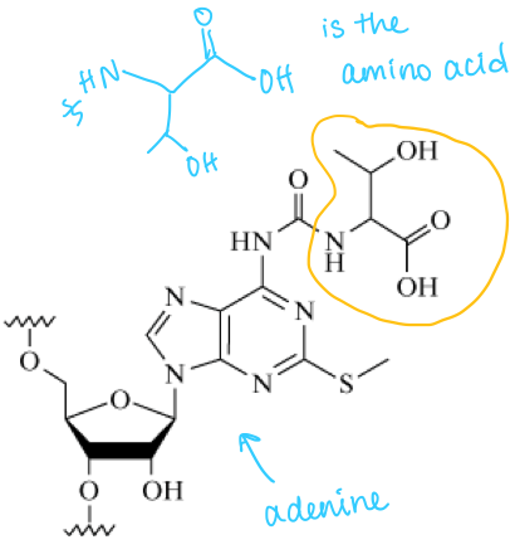 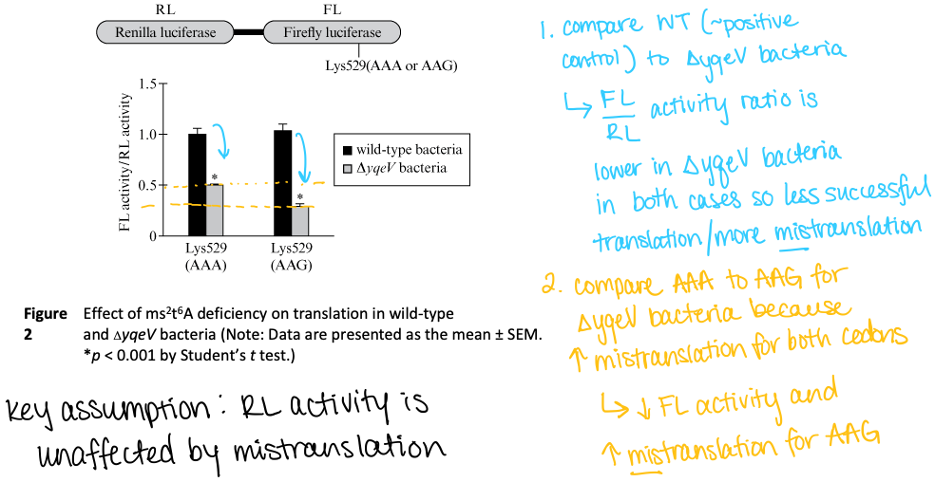 21) The passage begins with “Variations in the human gene CDKAL1, which encodes CDKAL1, are associated with impaired insulin secretion and increased risk of type 2 diabetes (T2D).” A deficiency will likely manifest in a similar fashion as the variants, so the answer should reflect something impairing or compromising insulin secretion.

22) If we read this question on test day and are unsure of where to start, we can take note of the condition(s) specified in the question stem: is the mice are nonfasting, we are interested in their response to glucose, and if we’re comparing wild-type to the knockout mice, then we want to know how the mice respond to changes in glucose when they have CDKAL1 deficiency.

Take a look at figures 3 and 4 to help us assess the upcoming answer choices. 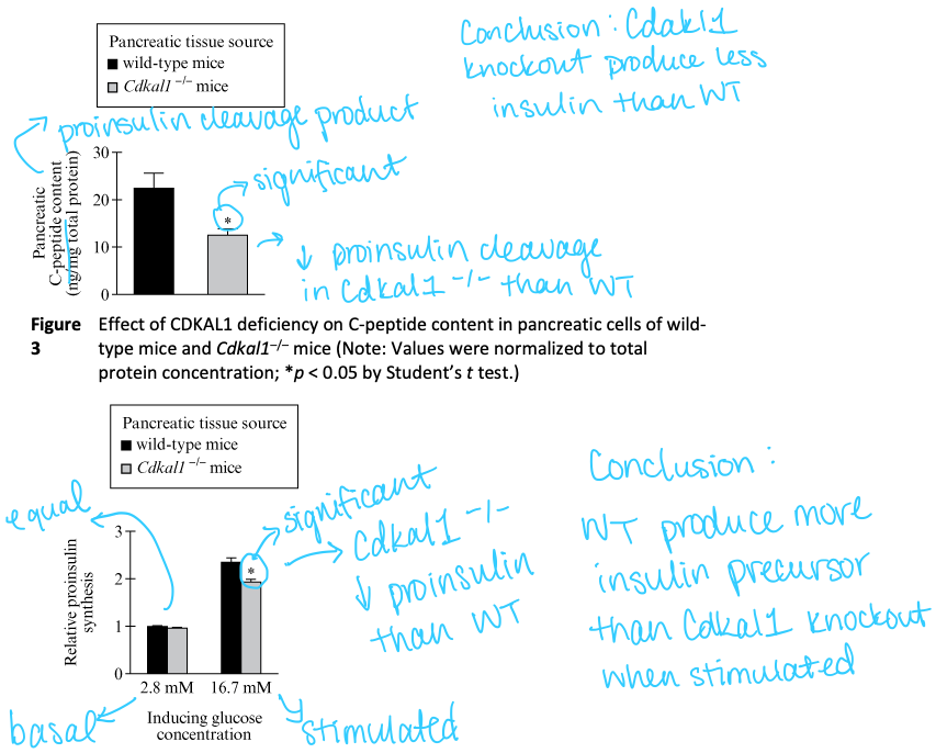 25) Our first instinct after reading this question may be to go back to Fig. 1—the question stem did mention it… However, if we’re looking to be as efficient as possible on test day, we need to recognize that Kt isn’t explicitly mentioned in the passage and that this question is a pseudodiscrete. Here, Kt is being used to represent Km, also known as the Michaelis constant

26) Enzymes, ribosomes and proteins care about the conformation of their substrates and are stereospecific. Changing the substrate from an L conformation to D-alanine means the ribosomes used to produce proteins will be unable to incorporate alanine.

27) Fig. 2 shows the protein and lipid content of the larval Linckia and Odontaster as a percent of dry weight, shown below in case we need to reference it.

For a brief review of net energy production when glucose is broken down, head over to https://jackwestin.com/resources/mcat-content/glycolysis-gluconeogenesis-and-the-pentose-phosphate-pathway/net-molecular-and-energetic-results-of-respiration-processes-2. You should also review glycolysis and the citric acid cycle if you are not yet comfortable with glucose metabolism. 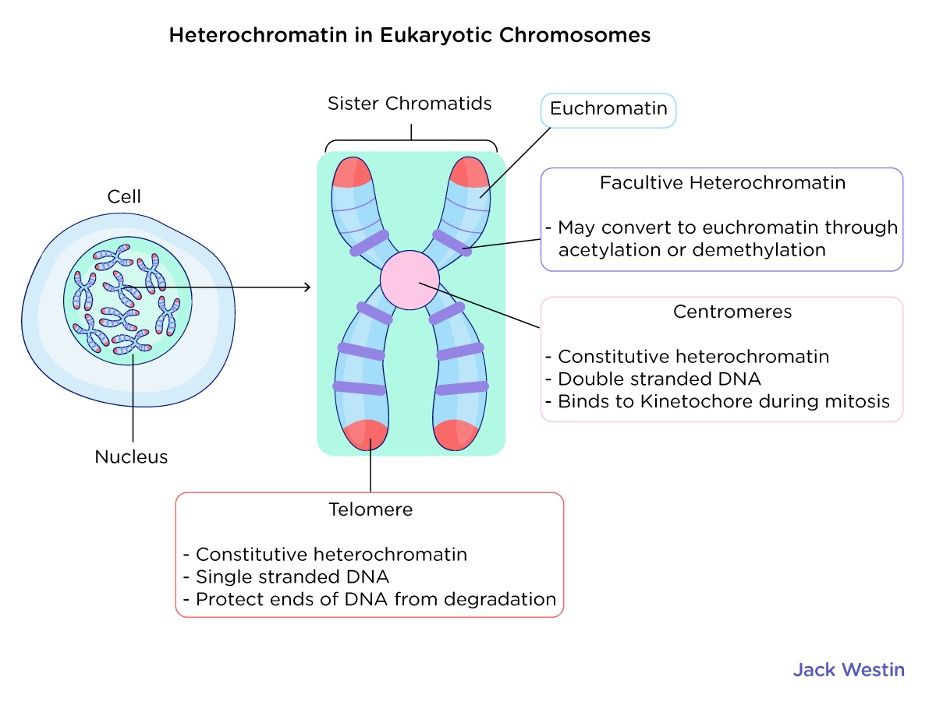 34) The question asks about PfEMP1-mediated characteristics, so let’s refresh our memory on what’s said in the passage: “PfEMP1 enhances P. falciparum survival by binding infected erythrocytes to endothelium.” Erythrocytes binding to endothelium means these red blood cells are collecting on the lining of the blood vessels.

35) The last sentence of the first paragraph specifies that the binding of infected erythrocytes in brain venules causes cerebral malaria. The question is asking what comes after venules. 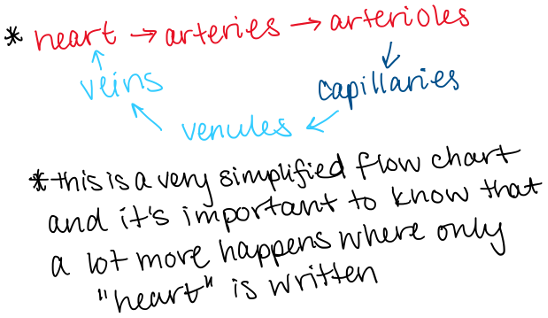 37) The first paragraph primes us with the following: “Normal color vision in humans is trichromatic…absorb either green, red, or blue light.” If there are three colors that determine color vision and three colors with absorption curves, then we can determine which color corresponds with which curve to answer the question. 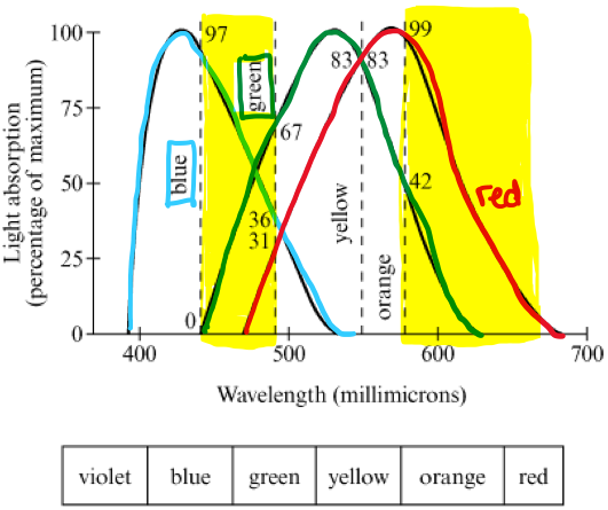 38) The best approach to this question is to review what the passage says about the different alleles, also summed up in Table 1, and then determine the combination that allows the mother to have normal vision but have a son with green pigment absent.

39) The first sentence states that the visual pigments absorb green, red, or blue light. The correct answer will involve a cell type that absorbs light and can pass along signals to the brain.

42) To answer this question, we’ll need to review the results shown in Table 1; see below for a brief interpretation. 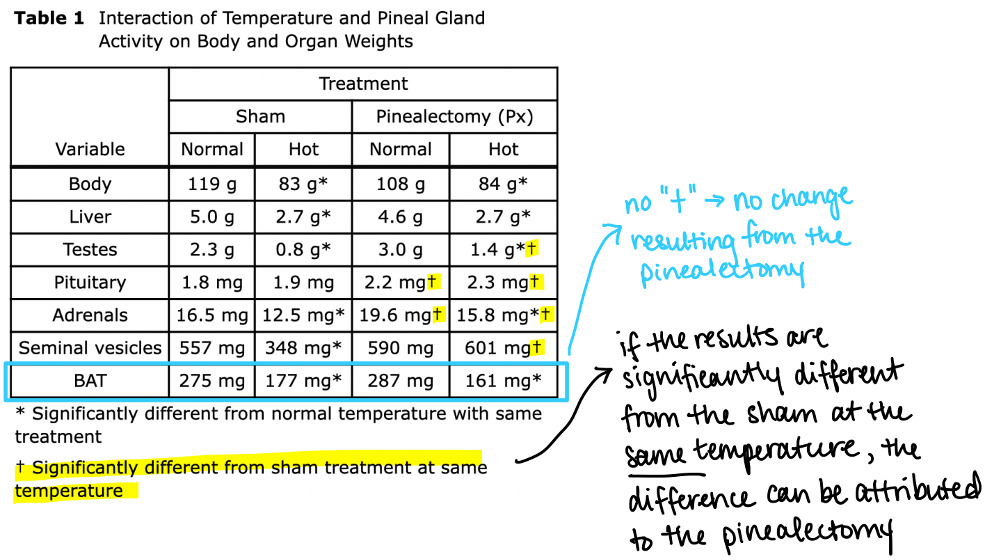 43) Once again, to answer this question we’ll need the results shown in Table 1. A quick skim of the answer choices lets us know to focus our analysis on the pituitary and testes weights. 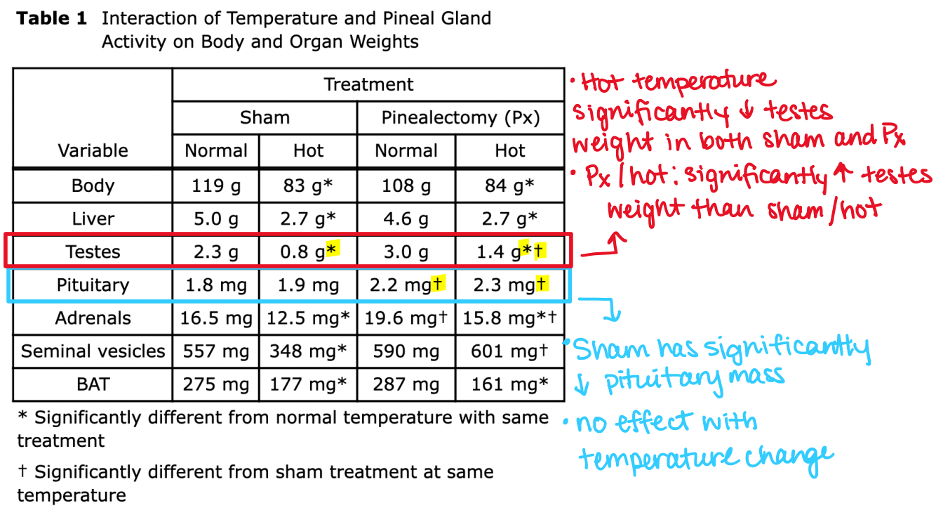 44) A paramecium is a type of protozoa that is a single-celled organism. Even if we didn’t know this, we could still work through this question!

B. Glucose-6-phosphate – G6P is produced in the first step of glycolysis so, like pyruvate, plenty of G6P will be produced. 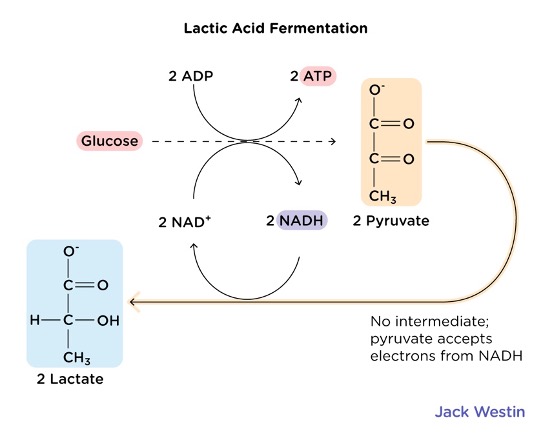 D. Acetyl-CoA – when oxygen is present, pyruvate is brought into the mitochondria and is converted to acetyl-CoA. But, if there is a complete absence of oxygen as described in the question stem, this will not occur, and acetyl-CoA will not be produced in a significant amount making it the correct answer.

Below is a graphic representation of the different fates of pyruvate depending on oxygen status: 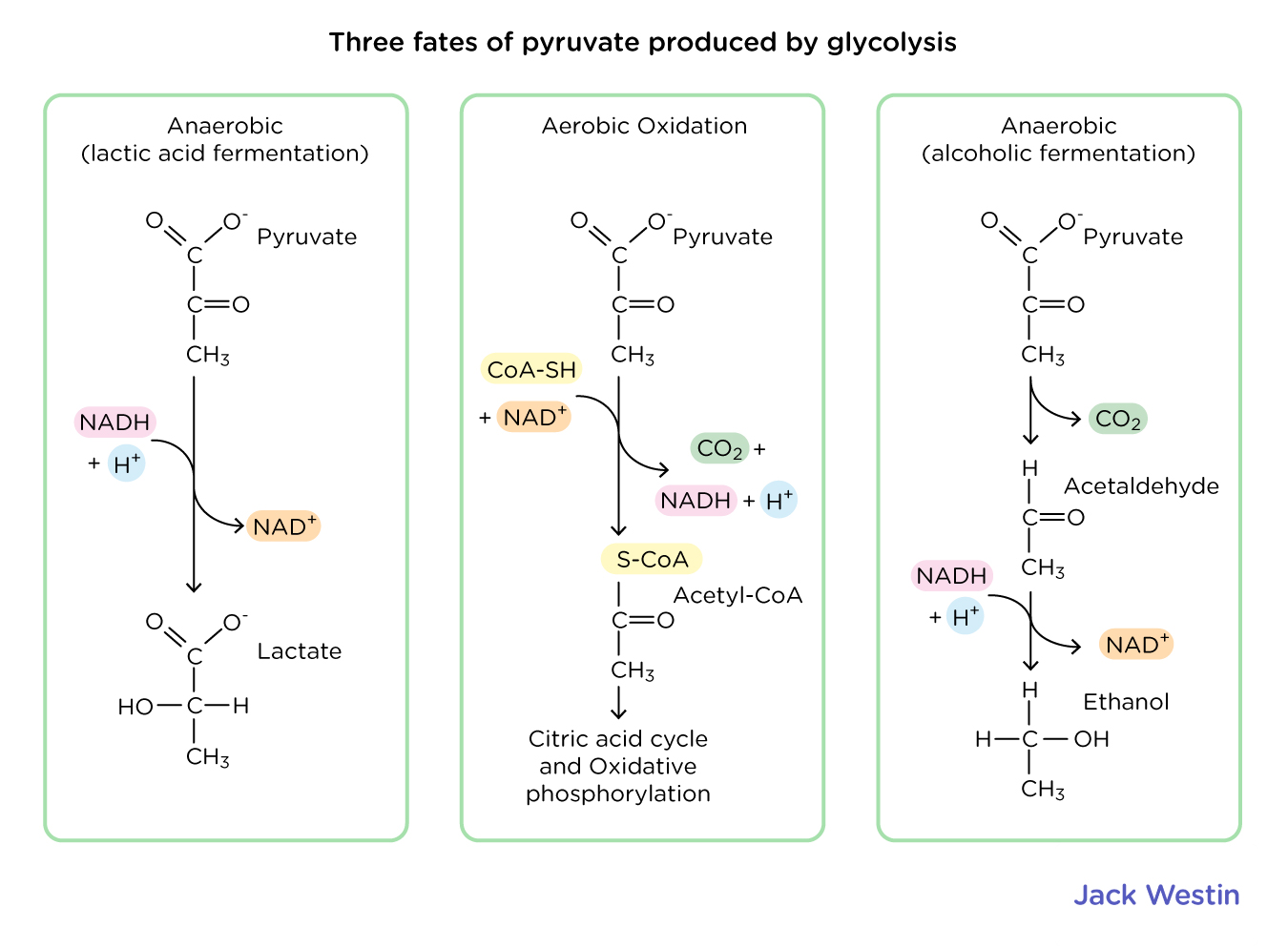 For more on base pairing, take a peek at the base pairing content page: https://jackwestin.com/resources/mcat-content/nucleic-acid-structure-and-function/base-pairing-specificity-a-with-t-g-with-c

50) To understand the relationship between PCO2 and acidity, we can head back to Equation 1.

To answer this question, we need to know the properties of alanine and proline. Alanine is a small hydrophobic amino acid, while proline is polar and disrupts alpha helices. Subunit A is introduced as “an α-helical 293-amino acid subunit A” which means the substitution of alanine to proline would disrupt the α-helical structure.

55) The end of paragraph tells us that “GPP130…might assist STx in evading degradation and reaching the endoplasmic reticulum as it binds the toxin with a Kd of 25 mM.” For the novel compound to be effective, it needs to bind STx more readily than GPP130, which means it needs to bind at a lower concentration and a lower Kd.

56) The first paragraph states that “The STx protein is comprised of two subunits… Subunit B mediates retrograde trafficking from the cell surface to the endoplasmic reticulum, after which subunit A is cleaved into the catalytic A1 domain.” The enzyme cleaves the protein to activate subunit A.

57) On test day, we would quickly scan the answer choices and realize that we just need to determine whether CAP and LacI are transcription activators or repressors.

Row 3: Here CAP is not bound and LacI is bound. The absence of an activator and the presence of a repressor should produce no transcription, and indeed that’s what is shown! This supports our interpretation of row 2.

58) Once again there’s a question on amino acids, but this time it’s asking about decreasing entropic penalty. To better understand this question, let’s imagine a folded protein with two main regions, a hydrophobic core, and a hydrophilic outside. Would the protein spontaneously unfold to expose the hydrophobic amino acids to the aqueous environment? No, that wouldn’t be too favorable. However, the folding of the protein is favorable. This question causes a lot of students distress because “entropic penalty” is often an unfamiliar term. Breaking it down, we know that entropy is loosely the disorder of a system, and a penalty is usually a price paid for something unfavorable. Putting the two together, along with our understanding of the favorability of protein folding, we can appreciate the following:

-entropic penalty: price paid for an unfavorable ordering of a system

-decrease in entropic penalty: decreasing the energetic price for the folding, so a switch between amino acids with similar characteristics such as valine to leucine

-increase in entropic penalty: increasing the energetic price for folding, so swapping amino acids with different characteristics such as alanine to aspartate

59) We’re ending the bio/biochem section with a very straightforward question; either you know the content or you don’t. On test day, we’ll devote less time to these types of questions. As shown below, the endoderm gives rise to epithelial linings, endocrine tissue and many of the internal organs. If you’ve had trouble memorizing the different structures that each of the germ layers gives rise to, hopefully this can help:

Ectoderm: The ectoderm gives rise to the structures people are often attracted to—the epidermis and hair, the mouth and teeth (and the anus), the eyes (cornea and lens), the nervous system (because we care about the mind!) and the sensory receptors that help us interact with the world around us. It also gives rise to the adrenal medulla and the pineal and pituitary glands. When in doubt, what are people often attracted to?

Mesoderm: The mesoderm is all about movement, go, go, go! The mesoderm provides the skeletal system, muscles and excretory system, the circulatory and lymphatic systems, the reproductive system and adrenal cortex. Mesoderm ~ movement of something.

Endoderm: When I think endoderm, I think of smooth and bumpy twins, lining the “insides.” Here we have the epithelial linings of the digestive and respiratory system, the lining of smooth structures like the urinary and reproductive systems, the bumpy endocrine tissues and other internal organs. 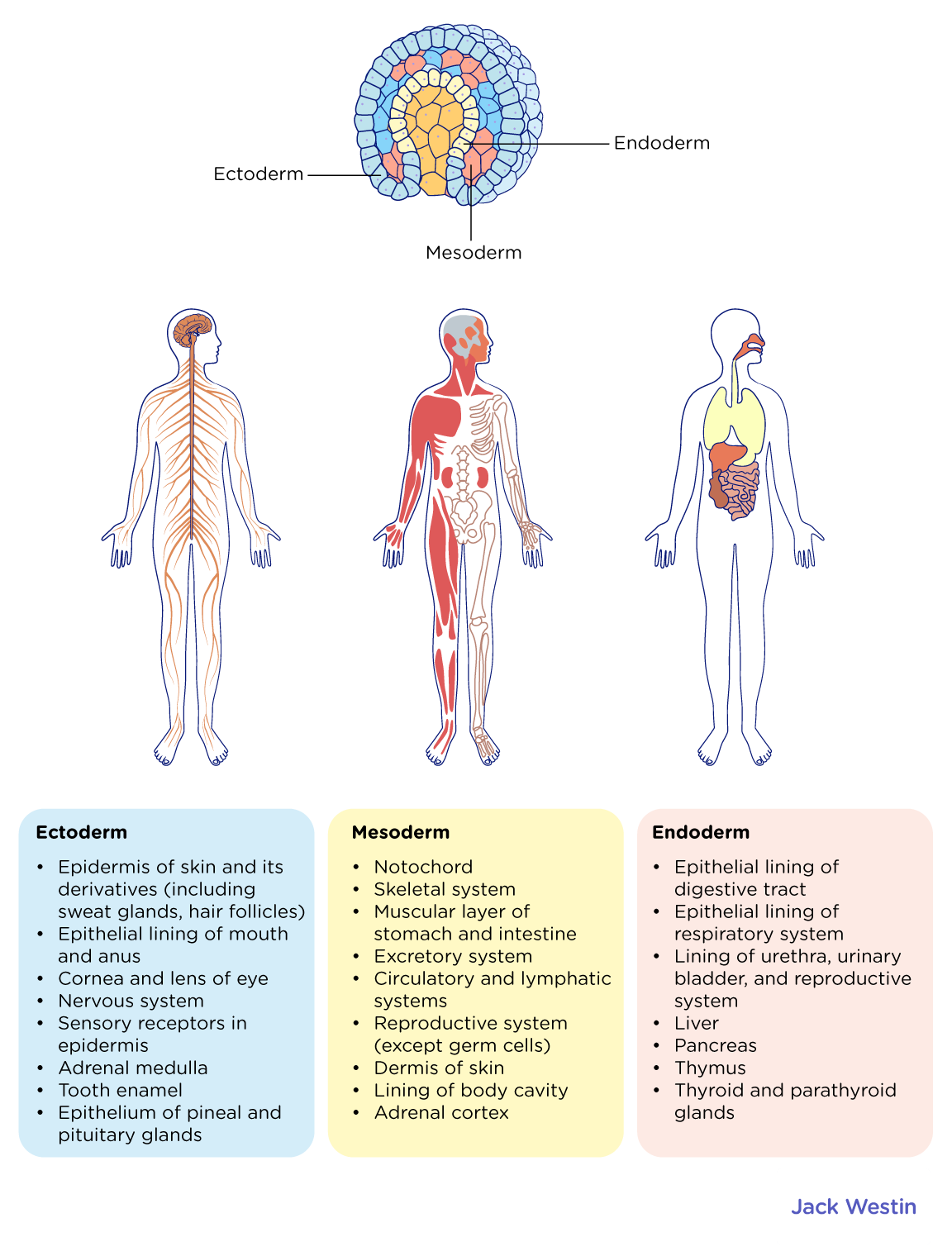 For a more extensive review of the germ layers, check out https://jackwestin.com/resources/mcat-content/embryogenesis/major-structures-arising-out-of-primary-germ-layers