The work-energy theorem states that the work done by all forces acting on a particle equals the change in the particle’s kinetic energy.

A force does work on the block and set it in motion. The kinetic energy of the block (the energy that it possesses due to its motion) increases as a result by the amount of work.

Vi and Vf are the speeds of the particle before and after the application of force, and m is the particle’s mass. 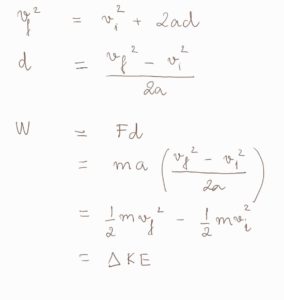