Blog / Vector Analysis Of Forces Acting On A Point Object

Vector analysis of forces acting on a point object

For an object to be in equilibrium, it must be experiencing no acceleration. This means that both the net force and the net torque on the object must be zero.

Here we will discuss the first condition, that of zero net force. If net force is zero, then net force along any direction is zero. The forces acting along each axis of motion must sum to zero: the net external forces along the typical x– and y-axes are zero.

Below, the motionless person is in static equilibrium. The forces acting on him add up to zero. Both forces are vertical in this case. 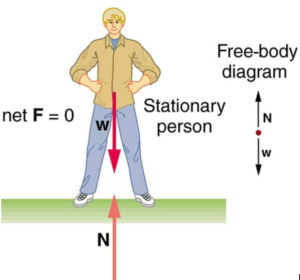 In another case, the car is in dynamic equilibrium because it is moving at constant velocity. There are horizontal and vertical forces, but the net external force in any direction is zero. The applied force between the tires and the road is balanced by air friction, and the weight of the car is supported by the normal forces, here shown to be equal for all four tires.