NMR (nuclear magnetic resonance) spectroscopy is one of the most widely used methods to characterize organic compounds because it can provide information about the different proton environments and thus the molecular structure.

Proton nuclei can be modeled as a spinning positive charge, which means they have a magnetic moment (according to the right-hand rule) that is perpendicular to that rotation, and this is noted as either spin “up” or “down”. When a nuclei is placed in a magnetic field (Bo), the nuclei’s magnetic moment can either align or oppose the applied magnetic field, so there is a low-energy state (α), and a high energy state (β), respectively, which can exist. If the appropriate energy is input (in NMR, radio wave frequencies), the α state can flip to the β state, and if this occurs, the proton is said to be “in resonance” with the external magnetic field, hence the name nuclear magnetic resonance spectroscopy. When the spin relaxes back down to the α state, each proton’s resonance energy is recorded by the NMR spectrometer as a frequency and a signal is plotted on the spectrum. The α-to-β energy difference is related to the frequency of the resonance transition by the equation: E = hv where h is Planck’s constant and v is the frequency, so B is directly proportional to E and v, see the figure below. Spectral analysis is explained in more detail below: (1) the position of the signal can tell you about the electronic structure directly around the proton, (2) the size/integrated area under each signal can tell you about equivalent protons, and (3) the multiplicity can tell you about nearby protons. Using these points, you can rationalize the signal positions, integrations, and splitting in the spectrum of ethanol below.

(1) Electrons near a proton nucleus (from other atoms, like C, O, N) create their own induced magnetic field in the opposite direction of Bo, which decreases the magnitude of the effective magnetic field (Beff) actually experienced by the proton, Beff < Bo. This is an effect called “shielding”. The magnetic field, B, is directly proportional to the frequency, v, (see below), so if the magnetic field decreases, so does the frequency of that proton’s resonance. Since NMR signals are plotted as a function of this frequency (relative to a standard, trimethylsilane), changing the frequency of resonance, changes the position, or chemical shift (ppm), of the proton signals in the final spectrum. Relatively shielded protons are bound to C (not very electronegative) and their signals have lower frequencies (“upfield”). The opposite effect can also occur: “deshielded” protons, which may be bound to a carbon which is also bound to an electronegative atom (i.e. Cl, O), have chemical shifts at higher frequencies on the spectrum. Most protons in organic compounds have chemical shift values between 0-12 ppm. Note that the position of protons directly bound to heteroatoms (as in OH or NH2 functional groups) may appear at a wide range of chemical shift values depending on the sample solvent and H-bonding interactions.

(3) The signals in an NMR spectrum can be split due to interactions with magnetic fields produced by neighboring protons (these are protons on neighboring atoms, or 3 bonds away from a proton). The signal will be split into n+1 peaks (with n=number of neighboring protons), and the peak height ratios generally follow the pyramid scheme shown below. For the ethanol example below, the OH proton will interact via H-bonding with other ethanol and water molecules in the sample solution, so practically speaking it will show up as a broadened singlet and not be split by or cause splitting to neighboring protons (although in theory it should, this is often an effect seen for OH or NH groups). However, the three equivalent Ha protons will be split by the Hb protons (n+1=2+1) and therefore show up as a triplet, and the Hb protons will be split by the Ha protons (n+1=3+1) and therefore show up as a quartet. 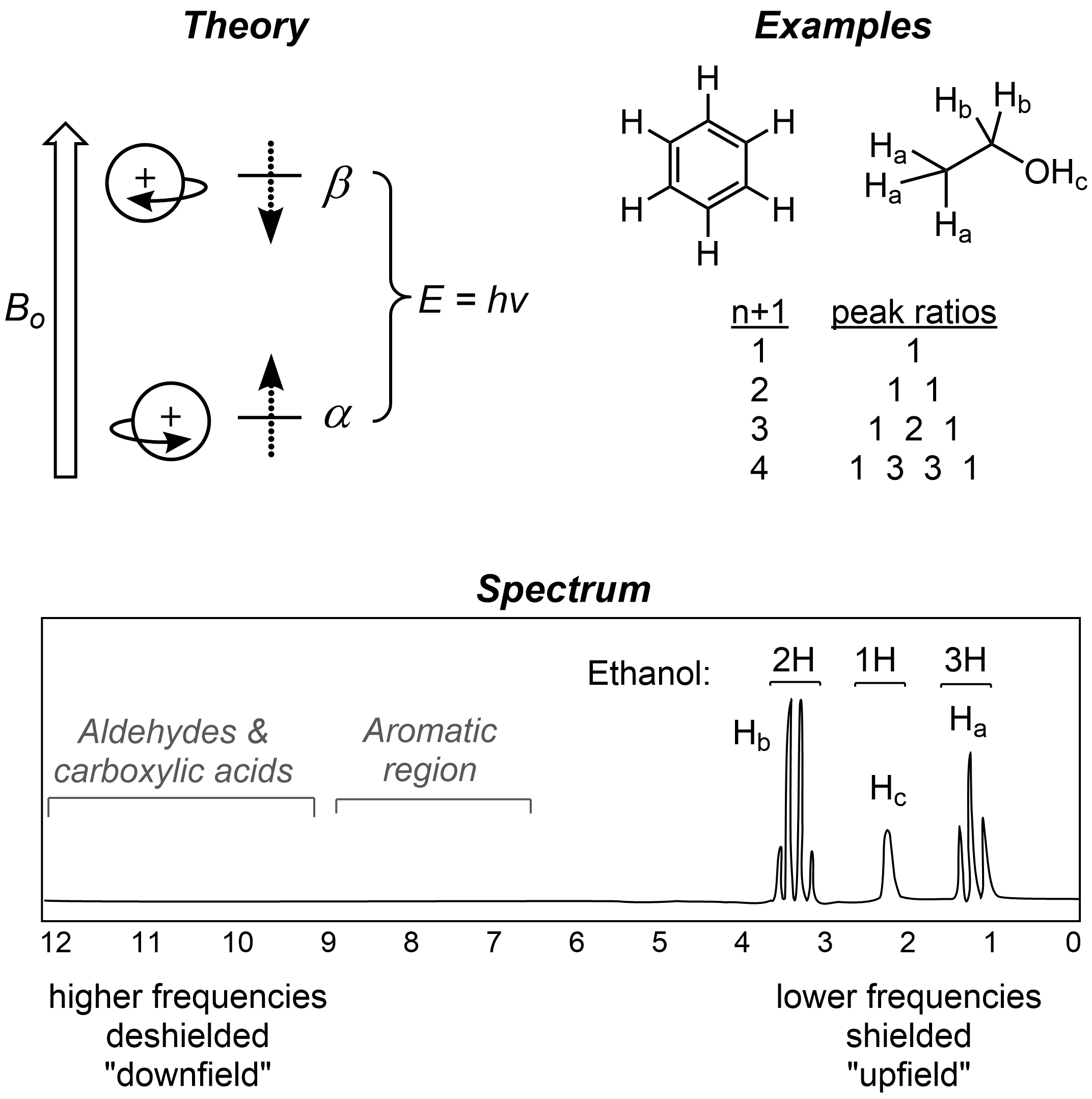