Carboxylic acids are functional groups composed of one carbonyl and one hydroxyl group, written as (-COOH). 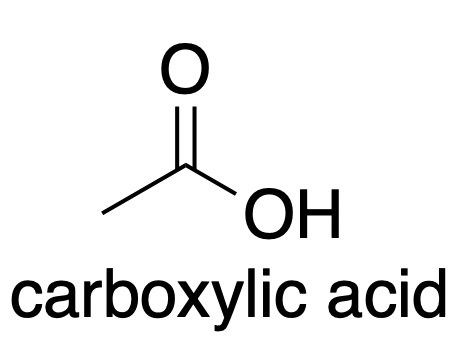 When naming compounds with a carboxylic acid group present, it is appropriate to replace the ending (the -e, for example) with -oic acid. The acidity of the carboxylic acid comes from the ability to donate the proton on the -OH substituent.

Due to the strong hydrogen-bonding, two important factors with carboxylic acids are that they have a high boiling point but are also soluble in water and other organic solvents such as toluene and ethanol. Carboxylic acids are also highly reactive to two factors: the two electron-rich oxygens in the carbonyl and alcohol portion of the functional group, and the electron-poor carbon between the carbonyl alcohol group, which is a desirable attack location for nucleophiles.